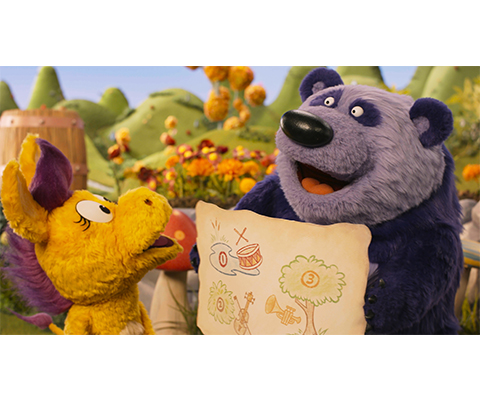 Licensing Street has also been named the worldwide licensing agent for the series.

“We are thrilled to work with Jada Toys and Licensing Street to extend the Donkey Hodie experience far beyond the screen,” said Matt Shiels, Vice President, Business and Legal Affairs, Fred Rogers Productions. “Licensing Street’s expertise combined with Jada’s track record of success in the U.S. and international markets present an exciting opportunity for this special brand inspired by Mister Rogers’ Neighborhood.”

“We are honored to be part of the Fred Rogers legacy and thrilled to base our toys on this charming, new property that introduces children to the wonderful and valuable themes of resilience and optimism through catchy songs, meaningful dialogue, and outstanding puppetry,” said Amy Austin, VP Licensing and Marketing, Jada Toys.

“Donkey Hodie is a standout series, and we’re pleased to partner with Fred Rogers Productions to help grow the brand in creative ways,” said JJ Ahearn, Managing Director, Licensing Street. “We’re delighted to be working with Jada Toys to bring Donkey Hodie and her pals to life for preschoolers and look forward to introducing the toys and announcing additional new partners soon.”

Inspired by the funny, quirky side of children’s television pioneer Fred Rogers, Donkey Hodie is set in the whimsical land of Someplace Else. The imaginative puppet series follows the adventures of Donkey Hodie, an enthusiastic and charming go-getter who takes on each day with curiosity, resilience, and sincerity, and her pals: Purple Panda, her loyal and empathetic best friend who wears his big heart on his sleeve; Duck Duck, a practical, quick- witted young mallard who loves to figure things out; and Bob Dog, an energetic and eager canine who is always ready to fetch a ball or boogie to music.

The social-emotional series is designed to empower children ages 3-5 to dream big and overcome obstacles in their own lives, to work hard and persevere in the face of failure, to be resourceful and discover they can solve problems on their own—and to laugh themselves silly along the way.

During the first 20 days of its May premiere, Donkey Hodie content generated 32.6 million streams, the most for any PBS KIDS series launch in the past five years. On-air, the series posted the highest Kids 2-8 ratings and reach of any PBS KIDS series during its premiere week, reaching 2.7 million TV viewers.*

About Jada Toys
Jada Toys is a privately held leading toy manufacturer. Founded in 1999, Jada has developed a worldwide presence at retail. Their strong focus on pop, trend, and car culture has grown their portfolio from die-cast vehicles and radio control to include collectible and action figures, dolls, preschool toys, and more. Partnering with best-in-class entertainment studios allows collaboration that has resulted in extensive lines of licensed product that appeals to collectors, kids, and families. Proprietary lines accompany the licensed product to round out Jada Toys' offerings. Jada Toy's is the US based division of the Simba Dickie Group. Visit Jada Toys at jadatoys.com

About Licensing Street, LLC
Licensing Street, LLC, is a NY-based licensing and consulting firm whose experience includes work on some of the most successful and beloved entertainment properties of all-time. The firm specializes in strategically developing licensed properties across all retail channels. www.LicensingStreet.com