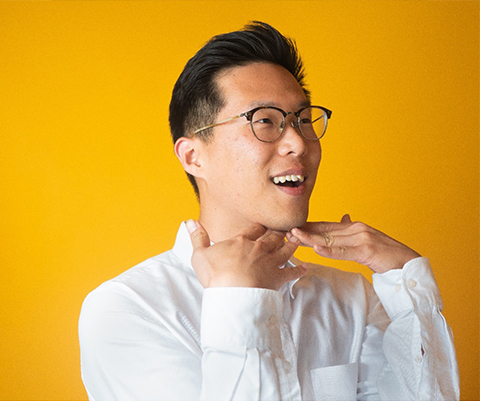 Tell us little bit about yourself and how your career led you to work in children’s television.

I’m a writer/comedian based in New York. I got the performing bug playing an angel in my church’s Nativity Story. I harked hard as an angel. And thanks to watching hours upon hours of television (which my dad attributes to why I wear glasses now), I got an education in storytelling. By night, I performed comedy, but by day, I was a creative producer for Gizmodo Media Group, helping tell stories about social injustice, environmental issues, and politics. Still itching to write fiction and remembering how much joy I got from children’s programming back when Saturday morning cartoons was appointment television for me, I applied to the Sesame Writers Room program, and I got in! That helped launch my writing career in children’s television, and I haven’t looked back.

Some of my fondest memories are from watching Arthur. I remember the theme song to this day, the Crunch cereal jingle, and I even have a framed crocheted piece of the fist clench meme. As a nerdy kid with glasses who occasionally wore sweaters, Arthur was my guy!

What goes into your role for an episode of Daniel Tiger’s Neighborhood?

As the writing coordinator, I work with writers of the show to make sure they have all the reference materials they need and inform them of their deadlines so that scripts stay on schedule. I also help schedule writing meetings and organize the writing calendar. Outlook is my frenemy.

When scripts come in, the writing team reviews them, and then I go in to do a last proofreading pass. From there, I send it out to the folks at Fred Rogers Productions, PBS KIDS, and our production and research teams. When they send their feedback, I organize the notes into one document, so it’s easier to look at in context of each other.

“Katerina Gets Mad” and “Daniel Gets Mad” are SO iconic. The strategy song, “When you feel so mad that you want to roar, take a deep breath and count to four,” is such a useful tool that I use day-to-day. Just kidding…maybe.

I’ve recently picked up surfing and have been loving getting out into the water and using muscles I never knew existed. And this past summer, I tried getting out more playing volleyball in the park and hiking in upstate New York. Also, I like walking around my neighborhood in Brooklyn to look at all the colorful doors--there’s so much personality.

As the weather gets colder, what is your favorite autumn activity?

Being from New York, I love going to apple farms to drink warm cider and eat fresh cinnamon sugar-crusted apple cider donuts. I get so much joy from dipping the donuts into the cider while a crisp breeze blows through the air.