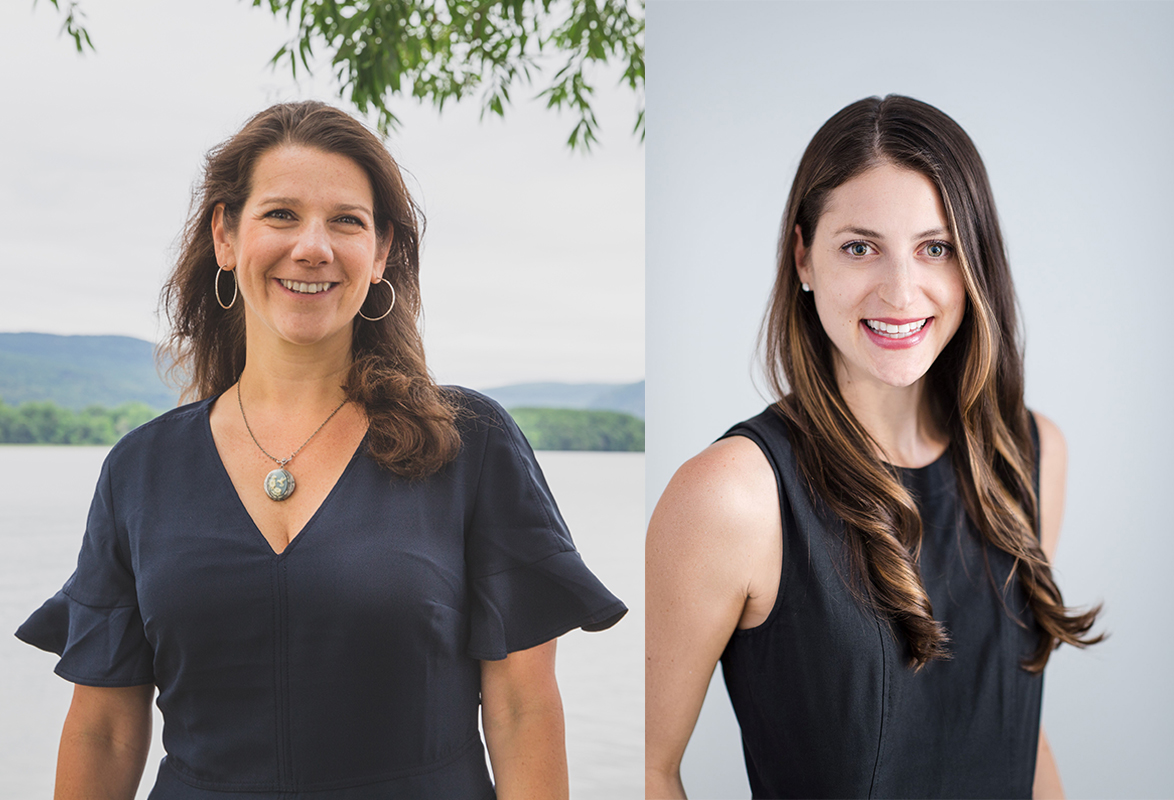 Alexandra and Jill are writers for the acclaimed PBS KIDS series. The pair were nominated for a 2020 Daytime Emmy award in Outstanding Writing for a Preschool Animated Program, and co-wrote the upcoming Daniel Tiger special, "Won't You Sing Along with Me?"

Tell us about yourselves and how you each became writers for a children’s television show.

Alexandra Cassel Schwartz: I always knew I wanted to work with kids. While studying in undergrad at Colgate University, I studied Child Psychology as well as Film & Media Studies, and was determined to meld these two interests into a fulfilling career. I went on to receive my Master’s in Developmental Psychology from Teachers College at Columbia University, where I continued to leverage my passion, creativity, and interest in entertainment. I specifically honed in on the preschool audience, and am so fortunate to work for 9 Story Media who values research and the needs of the child.

Jill Cozza-Turner: I knew I wanted to write for children and families, so after college I took a job as a receptionist at an animation studio and spent as much time as I could reading scripts, sitting in on meetings, and getting to know the writers, producers, directors, and artists. I eventually started pitching story ideas and once I wrote my first preschool script, I was hooked! Since then, I've written for over 30 children's shows, and it is truly the best job in the world!

ACS: Rugrats! I have always been obsessed with babies so was initially drawn to the adorable and simplistic character designs and details. But what I’ve come to appreciate about the show now more than ever is the witty writing. I knew even as a child that Rugrats was clever (I mean, a baby brother named Dil Pickles? Hilarious!), but I’m certain many of the jokes went over my head, and that’s okay as it didn’t take away from my comprehension. When I watch the show now (and I do!), I can see why my older sibling, babysitters, and even parents tolerated and enjoyed watching the series with me. I love a show that succeeds in reaching a whole family and encourages laughter and discussion, even once the TV set is turned off.

What goes into writing an episode of Daniel Tiger’s Neighborhood?

ACS: We are so fortunate to work closely with the Fred Rogers Productions team and child development advisors, many of whom worked with Fred himself on Misters Rogers’ Neighborhood. We are often asking, “What would Fred say about [insert emotion or behavior]?” We work together to identify a socio-emotional issue, the “Freddish” approach or strategy, for effectively managing that issue, and then frame it around a preschool-relatable and engaging storyline.

A key part of our writing is our research process, where we run the scripts by our most critical consultants: kids themselves! Our research team tests for attention, comprehension, interest, and engagement. Even with the seemingly straight-forward topics, the kids always provide fascinating insights. The writers are then tasked with making the necessary edits to get the script polished and ready for production!

JCT: The care that goes into every episode of Daniel Tiger’s Neighborhood is truly inspiring and totally unique from any other show I've worked on. We partner closely with the advisors from Fred Rogers Productions to make sure we're approaching each topic the way Fred would, and we also listen to parent feedback and draw on our own experiences with the little ones in our lives to generate stories! Research also plays a huge part in how we craft every episode of Daniel Tiger's Neighborhood. Watching our very (sometimes brutally) honest young audience react to an episode in the early scripting stage is a phenomenal tool to ensure we're keeping our stories age-appropriate and having a real impact on their lives.

ACS: Too hard to pick just one! The “Won’t You Be Our Neighbor?” movie, which introduced a new character named Jodi and her Platypus Family, was a true labor of love. It was an exciting challenge to take on a special of this magnitude and length, and enabled the writing team to really capture the emotional rollercoaster that comes with moving and making new friends. The movie also included several new, can’t-get-out-of-your-head songs, and it was such a joy to collaborate with the amazing composers at Voodoo Highway to make this special truly “special.” It’s been so rewarding hearing from fans that Jodi has quickly stolen their hearts and become a favorite character.

But like I said, I can’t pick just one episode! “Daniel’s Grr-ific Grandpere” also holds a special place in my heart. We’ve heard many times that fans feel like better parents and grandparents after watching and learning from Daniel Tiger. I feel so fortunate to work on a show that has the ability to strengthen inter-generational bonds. I wrote “Daniel’s Grr-ific Grandpere” with my own “Poppa” in mind, and much of the story was inspired by the time we spent together when I was a child. Though he passed away shortly before the episode premiered, I feel so proud to have shared his love, spirit, and humor with children everywhere.

JCT: I love when we can give families concrete strategies for coping with emotions. In the episode "Mama Travels for Work," Dr. Platypus needs to travel away from home for a few days, but gives her children "Love You Loops" as a way to mark how long she'll be gone and remind them that “grown-ups come back.” Now I actually make Love You Loops for my own children whenever I travel, and it's become one of our favorite traditions!

ACS: I like to play games with friends, pickle my own vegetables, and go for nature walks. If these sound familiar, it’s because they are the activities featured in some of our Daniel Tiger “shorts”! My writing (like most writers!) is very much inspired by my real life and interests… and now that I’m growing a future Daniel Tiger fan of my own (due in December!), I’m sure the next few years will inspire even more themes to write into the “Neighborhood”!

JCT: I crochet, run, play games with my kids, and bake, but it's a running joke in my family that my favorite thing to do when I'm not writing for the show is... write! Like most writers, I have new ideas, screenplays, and lots of stories in my head, so when I have downtime I like to work and tinker on those.

What were your first thoughts when you learned you were nominated for a Daytime Emmys award?

ACS: What was I going to wear?! (Just kidding, especially because this year’s Emmys were handled virtually). It’s such an honor to be recognized and while a shiny trophy sure would look good on the mantel, it’s the feedback from fans that’s even more rewarding. We receive photos, letters, and social media posts daily from little tigers around the world who are using Daniel Tiger’s ditties in their own lives. It’s such a good feeling that the thought and care we put into each and every message is making a positive impact on the next generation.

JCT: What a thrill to be nominated with this amazing team of writers! We truly love what we do, so to be recognized is such an honor and an incredible privilege.

What was your inspiration behind the upcoming special, “Won’t You Sing-Along with Me?”

ACS: These are truly unprecedented times. We started conceptualizing this special with Fred Rogers Productions and PBS KIDS back in March, and one of the biggest challenges was predicting what issues and practices would still be relevant when the episode would air a couple months later in August. Sad to say, not much has improved, so we are glad to be giving kids and caregivers tools to help manage this ‘new normal.’

We worked with consultants to identify what the most challenging facets of quarantine have been for this young audience, and asked the age-old question, “WWMTD?” (What would Mom Tiger do?!) One thing we were most excited to address was that Mom Tiger doesn’t ALWAYS have the answers! COVID has been frustrating for kids and parents alike because there is still so much uncertainty, and we wanted to address that even Mom Tiger doesn’t know when things will get back to normal; but she DOES have several strategies up her sleeve to help cope.

JCT: When we started conceptualizing this special, we asked ourselves how we could help our littlest neighbors and their caregivers cope with this unprecedented situation, but of course we didn't want to bring up any new fears. We decided that exploring the disappointment children (and grown-ups!) feel when things are different or uncertain would be the most relatable approach, and what's more disappointing than missing the annual Neighborhood Carnival?! Of course, this pandemic has brought up lots of other emotions, so we were so fortunate to pull from our catalog of beloved songs and episodes so children can sing along and help them deal with feelings of anger, sadness, frustration, and, of course, missing loved ones.

Since the Sing-Along special also kicks off the series’ fifth season, what are you most excited about in Season 5?

ACS: Season 5 has not one, not two, not three, but FOUR “specials”! While these episodes were conceptualized prior to COVID, we’re covering some BIG topics (and putting poor Daniel through the ringer!) that will help kids cope with things like nerves, stress, and changing circumstances, all of which feel especially poignant during the current climate.

JCT: This season is going to be grr-ific! I can't say too much, but our favorite tiger will be going to new places, experiencing very BIG emotions, and even meeting some new neighbors!