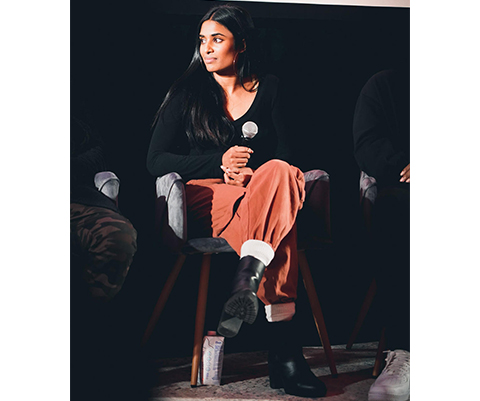 Get to know Lakna Edilima, writer and producer on Odd Squad Season 3.

Tell us a little about yourself and how you came to work on children’s television shows as your career.

Since I was a kid, I had two loves: dance and film/tv. As an 8-year-old, you could either catch me watching the Marx Brothers movies on repeat, or going to dance classes after school. So, it was a no-brainer when it came time to graduate high school in my hometown of Windsor, Ontario, that I needed to move to Toronto to pursue my dreams. It's not a typical career path for a Sri Lankan-Canadian kid, but I was lucky enough to have support from my family. Hopefully, it will become a typical path for people like me 🙂

Anyways, I studied film in my undergrad, and came to realize that ultimately, I really wanted to be a screenwriter. So, I studied TV Writing in my post-grad, and worked serving jobs to pay bills while I tried to break into the industry. A showrunner on a kids’ show took a chance on me and read my work, liked it, and since then I've been pushing my way around the industry in full force.

Odd Squad is the crème de la crème of children’s’ television, as it combines the best things: learning and stellar comedy. So, I'm overjoyed to have landed here as a writer and producer, getting the opportunity to work with the amazingly talented creators, showrunner, and writers, as well as the incredible cast and crew!

Without a doubt, Arthur was my favorite show! I used to wake up early just so I could watch Arthur before going to school, and then if I made it home on time after school, I could catch it again. I even convinced my teenage brother to watch it with me (it's THAT good). Honorable mention to The Simpsons, which I secretly watched at a young age when I wasn't supposed to (Sorry, Amma).

What are the steps that go into your role in making an episode of Odd Squad?

It all starts with us, which is an honor. As writers, we start with just an idea or a concept, and then we turn it into a big puzzle. A puzzle full of comedy, plot twists, and math! Figuring out what story to tell (since the options are infinite), how to incorporate learning opportunities for kids, and how to make kids and adults laugh are all steps we take in the writing room.

Once we've crafted the best story possible, then it's time to film it. As a producer, this means making sure all the things on paper get translated on screen. Does it look like how we imagined it? Or even better? This becomes my main objective once we move past the writing room and actually film the episode. It's hard work, with a lot of details to care for, but it's soooooo worth it. Also, it's really fun.

What is your favorite episode of this season of Odd Squad (without giving away spoilers!)?

This is nearly impossible to answer, but I'll try. I would say, from Season 3, the episode “16 and a Half Blocks.” It's part of the finale, and it really features our beloved Toronto! I won't say anything else...you'll just have to watch and see.

What do you like to do when you aren’t working?

When I'm not working, I'm probably training in Brazilian Jiu Jitsu with my husband (I'm a purple belt, thank you very much), doing an escape room with my friends, catching the occasional dance class, travelling with family, or...believe it or not... watching TV!

Since March is Women’s History Month, could you share a little bit about women who inspire you?

There are so many incredible women in my life who inspire me every day. I'm surrounded by friends and family that I look up to, and, if I could, I would do a write-up on all of them. But I've chosen one and I don't care if this is a cliched answer—it's true, and here's why:

My Amma (Mom) is one of the most inspirational people in my life, and if you've met her, you'd say the same. She was a Montessori teacher for 30 years, and is STILL dedicated to learning and teaching every day. She always has a creative way to make everything fun, and also a learning opportunity. Every road trip was accompanied by a travel journal that we had to make, which included historical facts/maps/pictures, the whole shebang.

Every birthday, my Amma creates a photo timeline of you and puts it up on the wall as an opportunity to look back and review your own wonderful life. Every holiday was filled with craft-making, talent shows, and roaring laughter as you listen to Amma tell a story. Everything she does is with joy! You're guaranteed to have fun if you're with Kumari, and you might learn something without even realizing it. That's her magic. And that's what I hope to do when I'm an Amma myself.