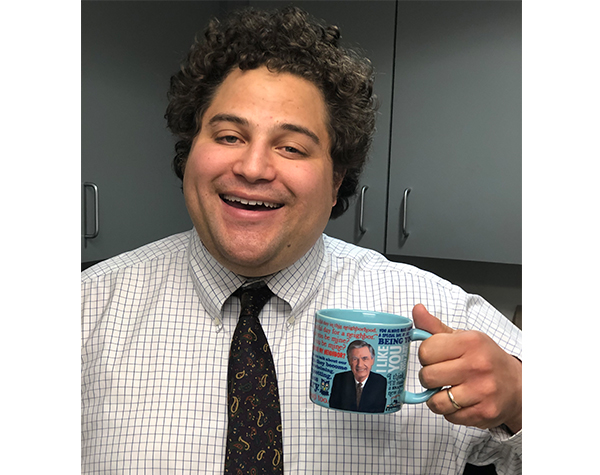 Learn what a day at the office is like for Chris Loggins, Senior Producer at FRP.

In 2019, Chris Loggins, Senior Producer at Fred Rogers Productions, was featured in a PBS KIDS Instagram takeover for Black History Month. We are sharing it again for February's edition of Meet Our Neighbors.

We caught up with him in 2020 to answer some questions, too.

Tell us a little about yourself and how you came to produce children’s shows as your career.

I’ve known for a long time that I wanted to do something that is useful in the lives of children and families. My mom is a teacher and I think that was a big influence. One of my first jobs out of school was working with an organization in Pittsburgh called “Beginning with Books.” It was an early literacy outreach group. I coordinated volunteer programming there and I also got to drive the Storymobile, which is like a mobile library. After Beginning with Books, I was able to continue working with children and families in a role with the Carnegie Library of Pittsburgh in the Children’s Department.

An interest in media and media production also led to a position with WQED, Pittsburgh’s public television station. The company that made Mister Rogers’ Neighborhood, known as The Fred Rogers Company at the time (Family Communications Inc. before that), was in the same building as WQED.

I got to know some of the people at The Fred Rogers Company and shared my interests with them. I am so fortunate they offered me a position right around the time Daniel Tiger’s Neighborhood went into production. Now I’m able to marry my interests and background in a job I love!

I really liked Fraggle Rock. The theme song makes me happy to this day.

I was a big Nickelodeon fan. I still remember the jingle for Stick Stickly, the popsicle stick that hosted the afternoon block. “Write to me, Stick Stickly, PO Box 963, New York City, New York State, 10108.” I loved shows like Doug, My Brother and Me, Eureka’s Castle, and Rugrats. I dreamed of being on the game shows: Double Dare, Nick Arcade, Wild and Crazy Kids, Legends of the Hidden Temple, and Guts (Do, do, do, do you have it?).

Some other early favorites were The Elephant Show, Under the Umbrella Tree, and Shining Time Station.

So yeah…hard to choose just one.

What are the steps that go into your role in making an episode of Daniel Tiger’s Neighborhood?

Wow! Where do I begin? As Senior Producer for Fred Rogers Productions, I’m lucky enough to be involved in all aspects of the production, from scripting through final delivery and broadcast.

I work closely with our production partners at 9 Story Media Group to decide the types of stories we want to tell each season. One of the really interesting things I get to do is meet with a group of child development experts, many of whom worked with Fred Rogers, to review every Daniel Tiger’s Neighborhood script to make sure it works for today’s children while also staying true to Mister Rogers’ approach to child development and social emotional learning. Sometimes I will consult with experts in specific fields given the needs of any particular episode. We see several drafts of each story and I am responsible for providing feedback to the writing team. You’d be surprised at how much careful thought and attention goes into every one of the “strategy songs” you hear in the final episodes!

Once a script is completed, I provide input on everything from music to character designs to storyboards.

I also help make the live action segments that appear in every episode of Daniel Tiger’s Neighborhood. I’ve been in several and have even directed a few!

It takes a lot of people to make Daniel Tiger’s Neighborhood. The show really is the result of the talent and dedication of every member of our team.

“Stop think and choose” is a song from the show, but it’s really not helping me right now. There are so many good episodes and it’s too hard to choose. One of the most rewarding things about my job is hearing from people about what their favorite episodes are and which songs have helped the children (and grownups!) in their lives.

What do you like to do when you aren’t working?

I love to take road trips. I often find that some of the best memories are made during the journey, traveling between home and the destination. I also like building with Lego® and playing board games.

Fred Rogers said, “play is the work of childhood.” I think it’s important to make it a part of adulthood, too!

Since February is Black History month, could you share a little bit about representation in children’s television?

One of my personal mantras is that all children should be able to see themselves positively represented in their media…whether it’s books, games, film, television shows or other. I actually picked that up from Beginning with Books. Books are often one of the first representations of the surrounding world for really little babies.

Representation is so important. Anyone that makes content for children has a real responsibility to be mindful about what they are putting out into the world, and it’s one that I don’t take lightly.

Watch the video below to learn what a day in the life is like at Fred Rogers' Productions!