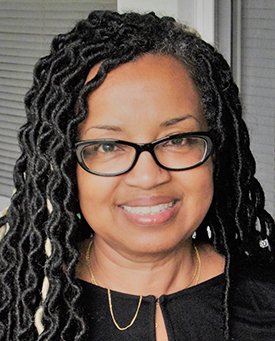 Get to know Aisha White, one of our child development advisers on Daniel Tiger's Neighborhood.

Can you tell us about yourself and how you came to work on Daniel Tiger's Neighborhood?
I am a mom and grandmom. I have a son and daughter, and I have four grandchildren ages 19, 11, 9, and 6. Currently I direct The P.R.I.D.E. Program, which is a Pittsburgh-based initiative at the University of Pittsburgh Office of Child Development that aims to help young Black children develop a positive racial identity.

I came into the Daniel Tiger’s Neighborhood work at the invitation of Bill Isler, former CEO of Fred Rogers Productions, because I had worked for the company years ago when it was called Family Communications, Inc. During that time, I was the director of the Mister Rogers’ Neighborhood Childcare Partnership, which was a program designed to help child care providers use the television program consistently and intentionally with the children in their care. I subsequently worked as a consultant on the development of a couple Mister Rogers’ Neighborhood trainings—one called “What Do You Do with the Mad That You Feel?” named after the song, and one called “Challenging Behaviors.” My history with the company is probably what inspired Bill to invite me to join the team.

What was your favorite television show when you were growing up?
Well, I’m pretty old, so my memories of programs from my earliest years are foggy. I do remember watching cartoons on Saturdays, shows like The Flintsones and the Jetsons, but the ones I remember more vividly are programs I watched as a pre-teen and teenager, such as The Patty Duke Show, The Dick Van Dyke Show, Gilligan’s Island. I loved them, but they were all very very white. It wasn’t until shows like Julia with Diahann Carroll were produced that I was able to see characters who at least looked a little more like me.

What are the steps that go into your advisory role in making an episode of Daniel Tiger’s Neighborhood?
I’m basically involved at two stages, as well as in a unique kind of way. The first is the brainstorming stage, when the new ideas and the related content are discussed and hashed out with all the participating team members. Those are so much fun, because they represent an opportunity to do some things with the show that are completely new while also revisiting themes that have really connected with the audience, which illustrates a desire for more.

The second stage is in reviewing and responding to multiple iterations of the actual scripts. It’s a lot of work, but I really enjoy that phase because the writers are so creative and clever—at times, I find myself laughing at my desk at work or on my couch at home in response to some of the things Daniel does and says. Sometimes, I think Arielle (Reed, production coordinator at FRP) and Chris (Loggins, FRP producer for Daniel Tiger’s Neighborhood) might get tired of hearing the same comments from me—“Oh my God, I love love love this script!”

Because I’m African American, I also help the team with issues that relate specifically to Black characters on the show. For example, there’s an episode in which Miss Elaina gets her hair fixed in a new style, so the team asked for my advice about what to put in her hair, how the parts in her hair should look, and how it was actually styled via the animation.

What is your favorite episode of Daniel Tiger’s Neighborhood?
“Daniel Gets Mad.” It’s the episode where Daniel and Prince Wednesday want to go out to play on the beach, but they can’t because it’s raining. I haven’t seen it in a while, so I had completely forgot that even Mom Tiger says she’s mad about the rain, which models such a great way to empathize with a child who is so angry that they’re kind of stuck. Like so many of the episodes, the conflict is not resolved instantly; instead Daniel manages to calm himself enough to think even though he’s still not happy about the rain. That’s one of the many things that I think distinguishes the show. It’s focused on social emotional issues and ways children’s emotions are managed. It doesn’t sugar coat what’s happening with children, but offers very realistic portrayals, and it shows that while it does in fact take time for children to grow and learn there are things adults can do to scaffold that for children.

What do you like to do when you’re not working?
One of my favorite things to do after 1. being with my grandkids and 2. listening to reggae music, which I could do 24 hours a day, 7 days a week, is 3. watching foreign police, detective, or drama series. I have subscriptions to Hulu, Netflix, Acorn, and Britbox—the last two offer programming that’s primarily from the UK or Australia. I also have watched Swedish police dramas, which are very well done, and no, the subtitles don’t bother me at all.