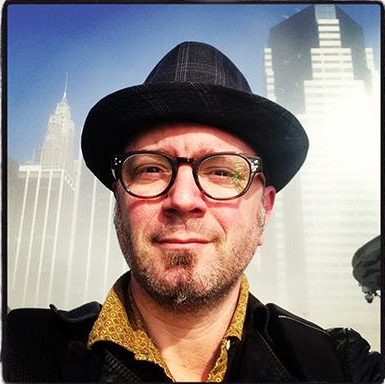 Just in time for the national tour of Peg + Cat Live!, meet J. Walter Hawkes, the Emmy-winning composer for Peg + Cat, one of our animated series on PBS KIDS.

How did you become a composer for television shows?

There was some hard work, and there was some luck. I moved to New York City to be a trombone player, and was playing with a different band every night. I also did a good bit of work writing arrangements for horn sections, small orchestras, and big bands to help make ends meet. I also had a job doing score preparation for the Carnegie Hall Jazz Band, which was an incredible experience. One of the first bands I started playing with in the city was a jump blues band that happened to have two members that were working on a new animated show for preschoolers. They brought me in to play trombone for the show. The show took off (I'd like to think because of my incredible trombone work, hahaha) and eventually they needed help in the composing department. I learned the ropes of television composition on the job, thanks to them. That show was Blue’s Clues.

That's tough for me to say just one. I was a fan of Captain Kangaroo... the ping pong balls got me every time. I also loved Sesame Street, The Electric Company (Spider Man!), and of course Mister Rogers' Neighborhood. It was specifically Mister Rogers that influenced my approach to composing music for preschoolers. I remember hearing Johnny Costa's extremely advanced piano improvisations when the credits would roll. Costa took it to Mars and back! I remember thinking, “some of those notes sound ‘strange,’ but they're so right!” That thought never left me. I could tell he was playing advanced music, and it didn't scare me at all. I believe it helped me grow. It made me think there must be so much more out there that I don't know. (I had not heard a lot of jazz at that point.) It also lead me to believe later in life that any kind of music—be it consonant or dissonant, simple or complex, happy or sad, exciting or soothing—can be wonderful for children.

What are the steps that go into composing a song for a show?

It depends on the production. When I was at Blue's Clues, the lyrics for the songs, as well as the music, were written by the composers. At Peg + Cat, the show's writers (and especially [co-creator] Billy Aronson) are gifted lyricists themselves. The lyrics drive the song. From the lyrics, decisions on feel, style, tempo, and melody can be made. I record myself singing the song with an accompaniment of instruments I play and virtual ones from the computer. After the producers (Jennifer [Oxley] and Billy) hear the song and tell me they love it (!), we bring in the voice talent to replace my voice and musicians to replace the temporary computer sounds.

What's your favorite episode (or song) of Peg + Cat?

We've done so many songs! There are two to four (sometimes more) songs per episode! I've always had a crush on “One Hundred is One Zero Zero,” and I think it's partially because it was from one of the very first episodes (the second one, if you want to get technical), and those were such fun times. The song itself has a rhythmic feel, kind of like Weather Report's “Birdland,” which isn't something you hear a lot. I played my specially modified vintage Wurlitzer electric piano on it. I even played the solo! I also got some inspiration from the amazing singer/songwriter Richard Julian (whose music I love), and the whole thing, to me, comes across like an old Schoolhouse Rock song. Mission accomplished!

How is writing music for a live production (like Peg + Cat Live!) different than writing for a television show?

Usually, one would have to modify the music and do a lot of score preparation so that it could be played by a specific live band. With Peg + Cat Live!, there is no live band. The music was pulled directly from the episodes, so there wasn't much for me to do.

What kinds of music do you like to play when you’re not working?

Work is play when I'm on the bandstand. I play mostly jazz or jazz-inspired music on the trombone, as well as in theater productions, rock bands, salsa bands, klezmer bands, ambient bands, etc. etc. I also play a lot of ukulele. My grandfather played the ukulele, so it's a link to my family. I enjoy playing it and singing along; it's a really fun instrument. I played all the ukulele on Peg + Cat. While I do play ukulele professionally, I often say, “people pay me to play the trombone, and pay me to stop playing the ukulele.”

Learn how to play the Peg + Cat theme song from J. Walter himself at the video below: 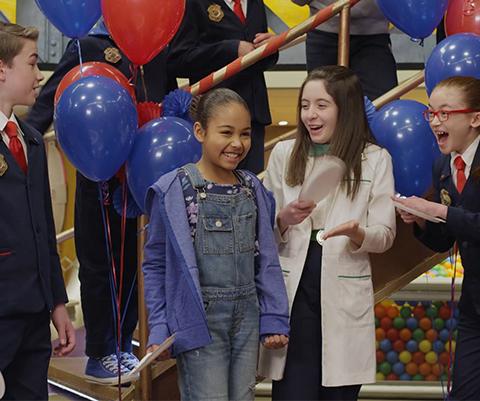 All three of Fred Rogers Productions's PBS KIDS series -- Odd Squad, Daniel Tiger's Neighborhood, and Peg + Cat -- have been awarded by the Parents' Choice Foundation with their prestigious Gold Award.